Keeping an eye on the ball – alcohol marketing and sports sponsorship

In this blog post, Dr Sheila Gilheany discusses a recent report on alcohol marketing in the 2020 Six Nations Championship prepared for SHAAP, the Institute of Alcohol Studies and Alcohol Action Ireland by the Institute for Social Marketing and Health, University of Stirling. Dr Gilheany then describes the soon to be implemented legislation on alcohol advertising and sponsorship in Ireland; the importance of marketing to Big Alcohol; and asks "What next for alcohol policy in Scotland?".

Watching rugby has taken on a whole new dimension within my family with us playing a game within the game called– spot the drink. So far, my 96-year-old father still holds the record and I’m torn between encouraging my sport-mad young nephews to beat him or just declaring that we are no longer watching a sport. Rather, it seems, we are watching one long alcohol advertisement.

This is not just conjecture from our family game though. A recent report, Alcohol Marketing in the 2020 Six Nations Championship: a frequency analysis, examined four televised matches played in Ireland, Scotland, France and England and found saturation levels of alcohol marketing.

The report, from the Institute for Social Marketing and Health, University of Stirling, prepared for SHAAP, the Institute of Alcohol Studies and Alcohol Action Ireland, demonstrated that in the televised 2020 rugby Six Nations Championship there was an alcohol reference every 15 seconds for matches played in Ireland, increasing to a reference every 12 seconds when played in the UK. In contrast, though, there was one reference every 60 seconds for matches played in France. The vast majority of references across the Championship related to the primary sponsor of the event – Guinness.

The variations reflect some differences in legislation around alcohol and sports marketing in the various jurisdictions. In France there is a complete ban on alcohol advertising yet even here there was a significant level of alcohol references mainly through what has been termed ‘alibi marketing’ – e.g. using the term Greatness for Guinness in the same branding font/colour.

What’s at play in Ireland?

In Ireland the report will form a useful baseline in relation to upcoming legislation due to commence later this year. The Public Health (Alcohol) Act 2018 (PHAA) contains a suite of measures designed to reduce alcohol use by 20% over a seven-year period. Based on the World Health Organization (WHO) ‘best buys’ around controls on price, availability and marketing the legislation has had a long gestation period and much of it remains to be implemented. However, from 12 November 2021 the Act provides for:

The original intention of the legislation as proposed in 2013 was for a complete prohibition on alcohol sports sponsorship. What finally emerged after a kick to touch report on the issue and a torturous process through the Oireachtas (Irish parliament) is considerably watered down from that, but still marks the first time that some statutory control has been put on the tsunami of alcohol sports marketing in Ireland.

The Six Nations report highlighted that around 50% of the alcohol references in the Ireland games were within the sporting area. That would suggest that under the new legislation there should be a considerable reduction in the amount of advertising visible during future matches.

It is worth taking a moment to reflect on the importance of controls on alcohol sports sponsorship. This pernicious form of marketing grants alcohol companies an opportunity to closely align their unhealthy product with all the positive elements of sport and in so doing, charge a discount in the public mind of the actual reality of alcohol harm.

Businesses build their brand position by aligning product values with the fans’ ambitions for the game and aspiration for success. This seamless alignment of values is largely unquestioned, particularly among vulnerable children, who readily accept the bona fides of the relationship between alcohol and sport.

But alcohol producers brand strategy is clinically commercial, careful to foster that relationship over time, building anticipation, and desire, among a naive customer base ensuring, to paraphrase the Business Employers representative group, a ‘lifetime of income from responsible drinking’ will flow.

The ferocity with which the industry has resisted controls in this area points to its importance to Big Alcohol. The extent of the powerful play by the drinks sector was made clear in disclosures via Freedom of Information requests and ultimately, despite the clear public health recommendations, this aspect of control was diminished in the final version of the legislation.

In the meantime, concern has only grown with recent evidence that nearly 15% of the population in Ireland has an alcohol use disorder rising to 37% among young male drinkers aged 15-24 years.

Another element of the PHAA, which has yet to be commenced, is a broadcast watershed for alcohol advertisements which would outlaw alcohol TV advertising between 03.00-21.00 and place similar restrictions on radio advertising. The importance of such controls is clear from the 2020 report of the Broadcasting Authority of Ireland on the Effect of the Children’s Communications Code which noted that Diageo, the parent company of Guinness, is the number four advertiser to children in Ireland aged 4-17 years. Even in the absence of a complete ban on alcohol sports sponsorship implementation of this measure would have a significant impact on the level of alcohol marketing seen by children given the usual day-time broadcasts of such fixtures and the wraparound effect of alcohol sports sponsorship which uses a sophisticated combination of media messaging around matches. This is a good illustration of the interlocking nature of the PHAA and points to the importance of its urgent and coherent implementation.

With this in mind, it is interesting to observe developments in Scotland around alcohol policy. In Ireland we have drawn much inspiration from our Celtic cousins. The emerging evidence base around Minimum Unit Pricing (MUP) in Scotland was a key element in the recent government decision to commence this measure in Ireland from January 2022, more than three years after it was provided for in the PHAA. Colleagues in the Irish health services are learning from the approach in Scotland including the introduction of guidelines in Scotland around diagnosing Foetal Alcohol Spectrum Disorders (FASD), a first in the UK. Incidentally the PHAA includes legislation providing for health warning labels such as on drinking in pregnancy – also yet to be implemented.

The Scottish government’s commitment to a consultation on measures to restrict alcohol marketing to children is welcome. Recent polling certainly indicates strong public support with 75% of adults in Scotland backing such moves. The PHAA has already brought in controls in Ireland around the placement of outdoor advertisements close to schools and public amenities as well as on public transport and a ban on advertisements in cinemas before under 18 films. Even more significantly the PHAA allows for controls on the content of advertisements which, when implemented, would prevent much of the current marketing which draws direct parallels between sporting values and alcohol.

A further illustration of the importance of such statutory content control came in 2019 from the self-regulation body in Ireland, the Advertising Standards Authority of Ireland ruling that this Guinness/Six Nations poster board did not contravene its own voluntary code which states that alcohol advertisements should not imply that drinking alcohol contributes to sporting success. In fact, the Authority went as far as to agree with the advertiser who stated that the ‘focus of the advertisement was purely on the sponsorship of the tournament by Guinness’ rather than an advertisement to drink alcohol. Are we seriously expected to believe that Guinness is not hoping for an increase in sales from its multi-million pound six-year sponsorship deal? 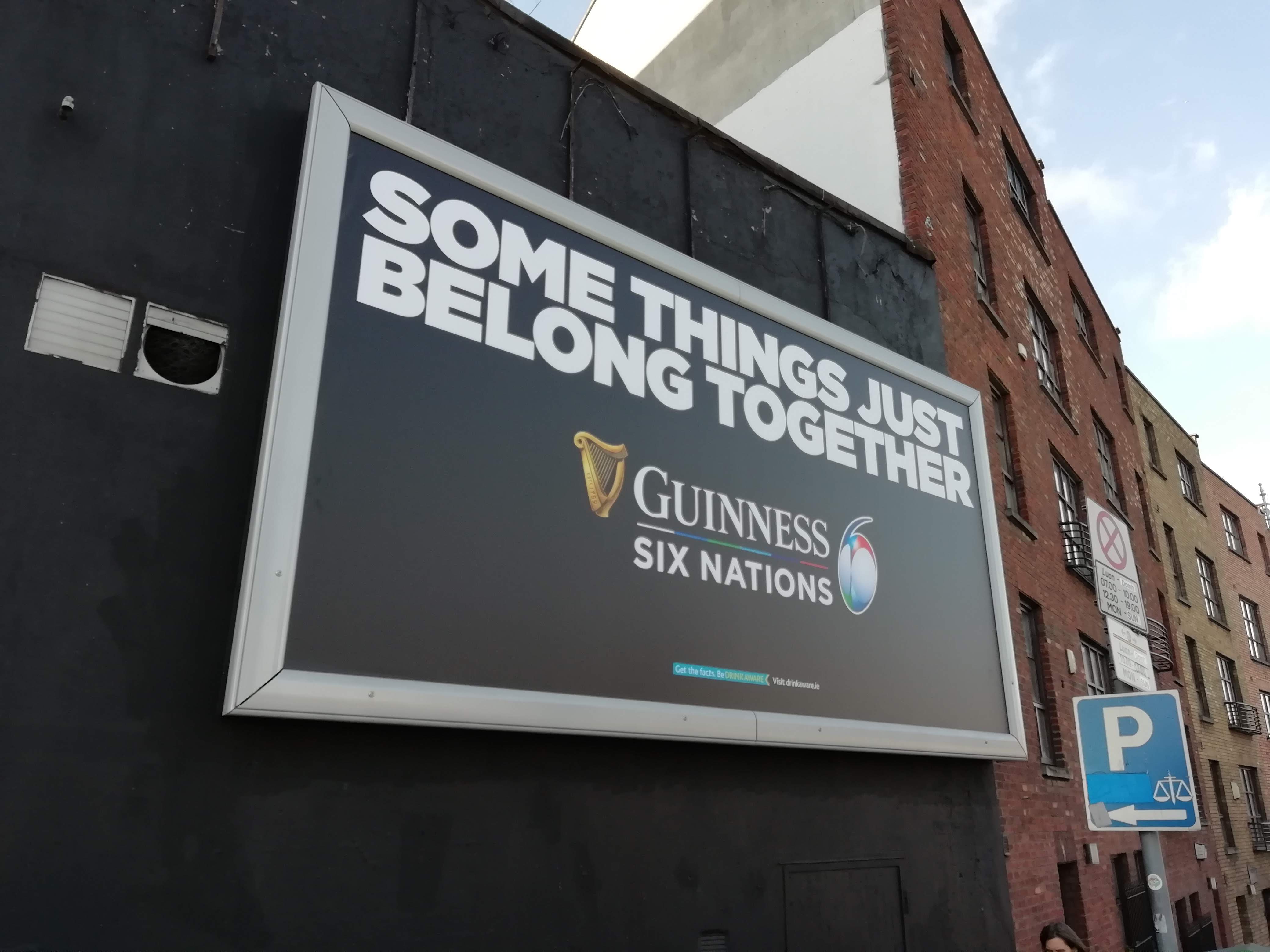 Undoubtedly legislators in Scotland will face significant push back from industry on any moves to control alcohol marketing. But Scotland has shown exceptional determination to face down such opposition when it became the first country in the world to introduce MUP and I was encouraged to hear First Minister, Nicola Sturgeon, reiterate her commitment to the measure when speaking at a recent WHO event and encouraging other countries to persevere despite resistance from the alcohol industry. The First Minister also made clear her support for the WHO SAFER initiative which highlights the importance of bans or comprehensive restrictions on alcohol advertising, sponsorship and promotion.

The facts are clear, Scotland like Ireland has a serious problem with alcohol and shares a reputation for hard drinking which induces both national concern and paradoxically a degree of shame-faced pride. But this is not a problem without a solution. Evidence based public health measures such as controls on pricing, marketing and availability work and are recommended by international expert bodies such as the WHO and the Organisation for Economic Co-operation and Development (OECD). Politicians and policy makers can take heart that public opinion is clear on this. We don’t want our children being recruited as the next generation to swell the profits of a multinational industry which seeks to appropriate our culture, our interests, our values and ultimately even our national identity.