3 years of MUP in Scotland: promising signs, more to be done 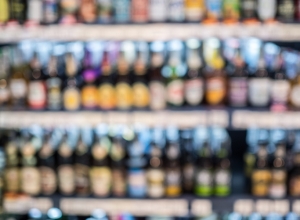 MUP has gained wide acceptance from policy makers and the public. There are encouraging signs of reduced sales and reduced deaths. These improvements are modest, alcohol deaths and harm remains way too high, and in this blog Dr MacGilchrist argues that the MUP level should be raised to 65p per unit without delay.

There is overwhelming evidence that when it comes to alcohol, harm is closely related to consumption which in turn is very sensitive to price. Therefore measures to regulate the price of alcohol are highly effective in reducing alcohol harm.The question is which measures, and what price?

The Scottish Government, in response to a crisis of soaring deaths from alcohol in the mid 2000s, introduced a range of measures including a proposal to restrict the sale of very cheap alcohol. Minimum Unit Price (MUP), as it has become known, was advocated by SHAAP and widely endorsed by health experts. In 2012 the Scottish Parliament passed the Alcohol (Minimum Pricing) (Scotland) Act, and thus Scotland became the first country in the world to legislate a ban on the sale of any alcoholic drinks below a floor price based on their alcohol content. The regulation of excise duty on liquor is reserved to the UK Government, so the choice of MUP by the Scottish devolved administration was pragmatic, but there is good reason to think that MUP is a better-targeted tool than excise duty. Modelling predicts that MUP reduces sales, consumption and harm especially in those heavy drinkers most at risk who preferentially consume the cheapest drinks.

[The debate regarding MUP and excise duty is not an ‘either – or’ argument. The UK Government has since 2012 failed to raise the level of excise duty in line with inflation, thus rendering alcohol more affordable year on year. This policy has been linked to rising alcohol deaths and hospital admissions. SHAAP and the Alcohol Health Alliance (AHA), in welcoming the forthcoming UK review of alcohol excise duty, continue to press the UK Government to both increase the rate of duty and overhaul the entire excise duty system.]

Although MUP was universally welcomed by health experts and organisations dedicated to reducing alcohol harm, critics – largely the drinks industry whose aim is to increase rather than reduce sales – cast doubt on MUP’s effectiveness and legality. The implementation of the policy was delayed by 6 years due to repeated failed legal challenges and it was not until 1 May 2018 that MUP finally came into effect, with the floor price set at 50p per unit. Prior to 2012, the only place where a pricing policy similar to MUP had been implemented and evaluated was in certain Canadian provinces. The Russian Federation imposed a minimum price on vodka in 2010 as part of a range of measures which has seen a marked fall in consumption and reduced alcohol mortality. In the intervening years variations on minimum pricing have been implemented in several other countries in the former Soviet bloc. MUP itself has since been introduced in the Northern Territories in Australia (October 2018), Wales (March 2020) and Jersey (April 2020). In the Republic of Ireland, MUP is already on the statute book and is expected to be implemented this year.

So MUP seems to be a policy whose time has come. But is it working?

Given this intense interest in MUP as a means to reduce alcohol harm, it is clearly important to monitor and evaluate its effect and we are fortunate in Scotland to have a programme dedicated to doing exactly that in MESAS (Monitoring and Evaluating Scotland’s Alcohol Strategy). Scotland has access to reliable data on alcohol health harm, both morbidity (hospital admissions) and mortality (death certifications) and also on alcohol sales (the best measure of consumption at a population level). MUP has not been introduced in England, providing a useful real-time “control group” for comparison.

Consumption. In discussing retail sales data it should be remembered that although accurate, it is incomplete. The discount supermarkets Aldi and Lidl do not participate, and while including online sales via the major supermarkets, it does not capture other online sales. SHAAP has called repeatedly for it to be made compulsory for all retailers to provide sales data. In Scotland off trade alcohol sales fell from 7.4 to 7.1 litres of pure alcohol per adult in the 12 months following MUP’s introduction and rose from 6.3 to 6.5 litres over the same time frame in England. Although the Scots still drink more than the English, the gap is narrowing! MESAS recently re-analysed the sales data following improved market research methodology. Overall, alcohol sales have fallen between 3 and 4% since the introduction of MUP. Given that consumption was more or less static for the preceding 6 years, and there has been no similar fall in England, it is highly likely that MUP has been instrumental in causing this fall. As expected the effect has been most dramatic on very cheap alcohol. Sales of white cider in Scotland fell by 15.2% in the first year of MUP and rose by 9.3% over the same period in England. So MUP is having the desired effect of a targeted reduction in the consumption of the cheapest alcohol brands. 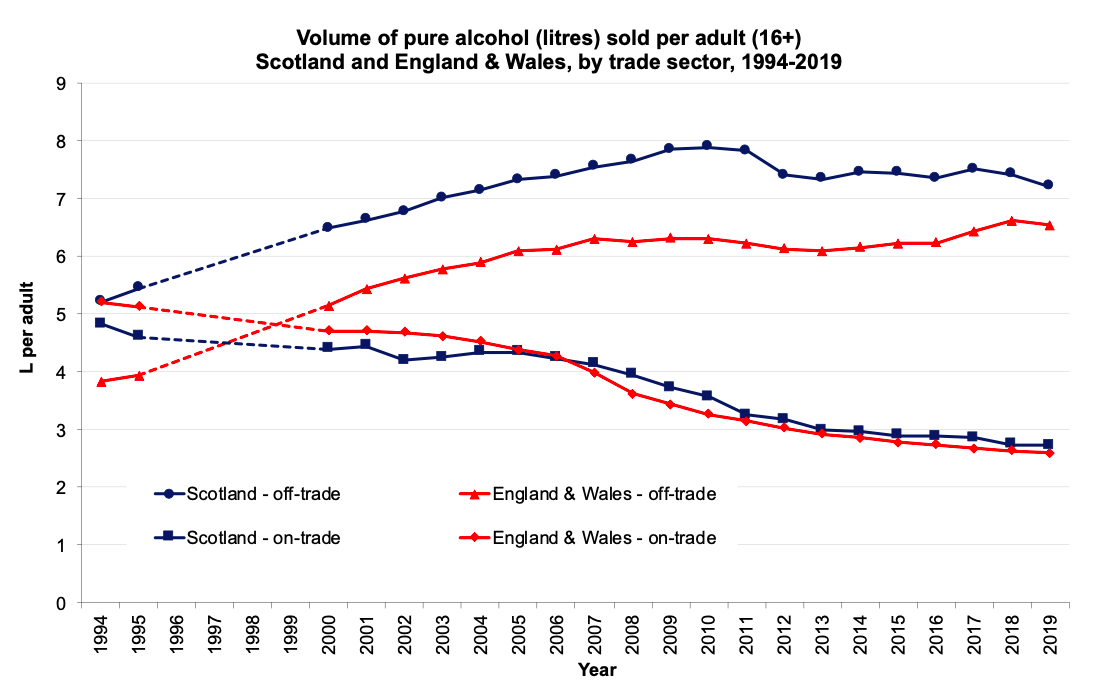 What about alcohol harm? Is it too early to say? It is still early days, particularly for deaths where the most up to date figures are for 2019, the first full year following the introduction of MUP. The biggest killer from alcohol is liver disease, accounting for over 70% of all alcohol specific deaths, and it takes many years of heavy drinking to develop alcohol related cirrhosis. Despite this, changes in alcohol mortality – in either direction - happen surprisingly quickly when consumption patterns change. For example in Finland in 2004, when taxes were cut by one third, alcohol mortality increased by 19% in men and 33% in women within 2 years. Modelling the effects of MUP, the Sheffield group, whose work informed much of the thinking about its introduction, predicted that beneficial effects on health would start to be seen within the first year. So it is reasonable even now to look for any effect on alcohol morbidity and mortality.

Deaths. In Scotland, the latest full year for which statistics for deaths is available is 2019, which represents the first full year since MUP’s introduction in May 2018. There were 1,020 alcohol-specific deaths registered in Scotland in 2019, 10% fewer than in 2018 and the lowest annual total since 2013 (1,002). 2019 represents the first substantial decrease in deaths in recent years, after a period of general increase since 2012. It is likely that this encouraging reduction is linked to MUP. 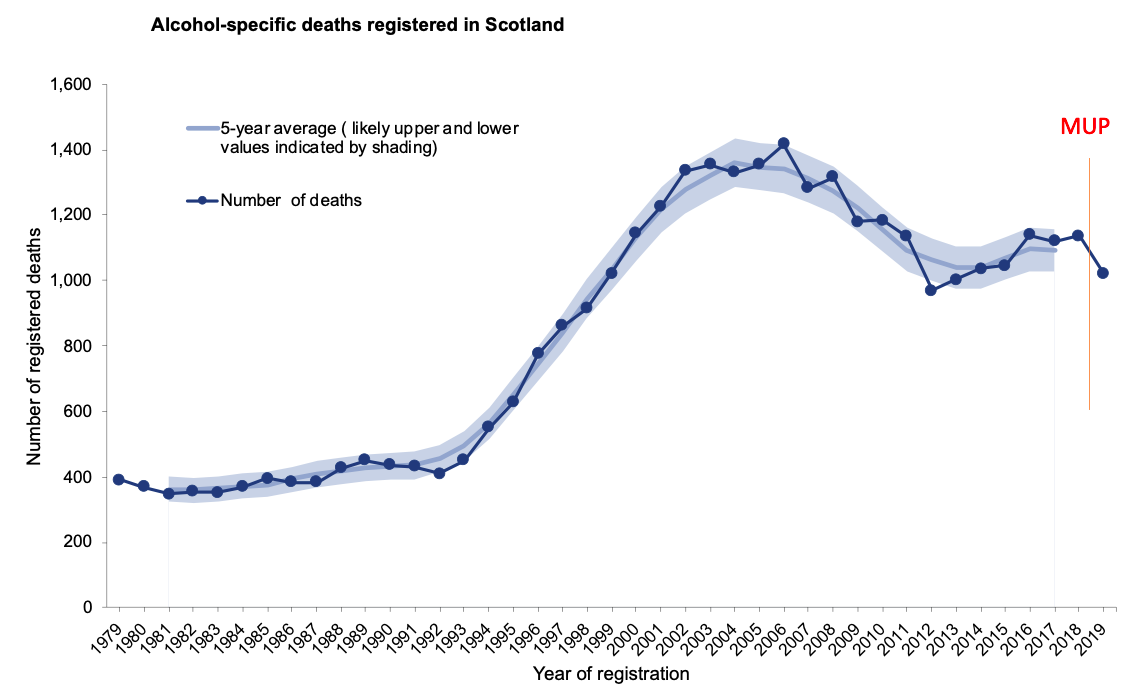 Hospital admissions. Figures for hospital admissions are available up to March 2020, i.e. almost 2 years post-MUP, although the data for 2019-20 is incomplete. Total hospital admissions have been static in Scotland for several years, including 2 years post-MUP, at a time when they have risen significantly in England. Alcohol-related liver disease (ArLD), although only responsible for around one-fifth of all alcohol admissions, is regarded as a good barometer of alcohol harm. ArLD admissions, which had been steadily rising from 2012-13 to 2017-18, have fallen in each of the 2 post-MUP years. Thus there is encouraging data that MUP is already having a positive impact on reducing alcohol health harm, albeit a modest one. 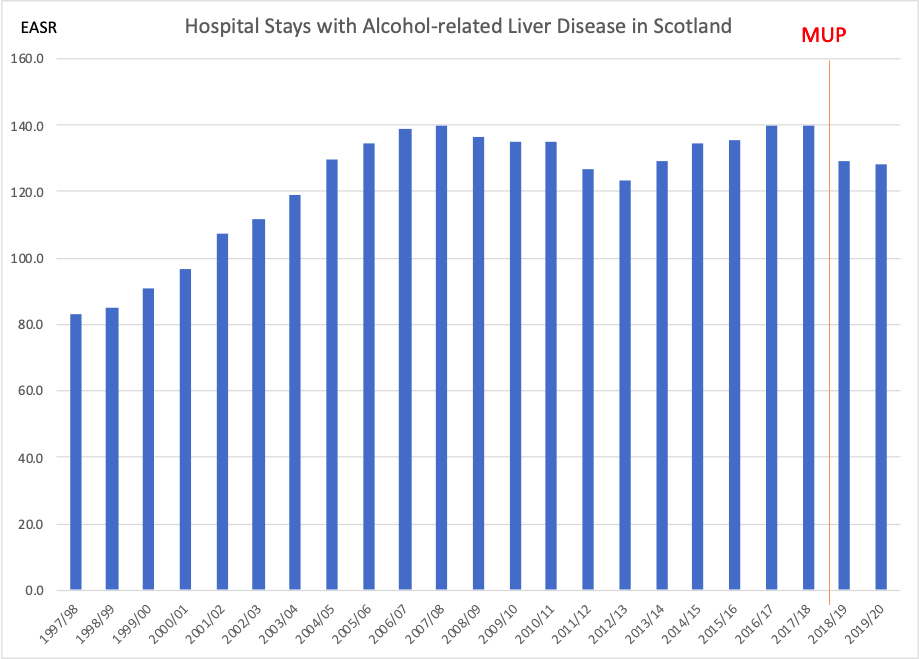 But what about that 50p price level? So is that it, then...job done? Not at all. Firstly, these improvements, encouraging though they are, remain modest. Over 1,000 deaths per year in Scotland is still way too high, and there is a long way to go to get back to the levels of harm we were seeing in Scotland just a few decades ago. Alcohol pricing policy is not the only effective measure. We also need to reduce alcohol’s availability and attractiveness with better regard to health harm when applying licensing rules, better labelling of alcohol products and stricter control over alcohol advertising in the media and via sports sponsorship.

However, on pricing, the original modelling from the Sheffield Alcohol Research Group, on which an MUP of 50p was based, was produced in 2009 and last updated in 2016 so is already out of date. When setting the price it is necessary to balance the benefits of reduced alcohol harm against penalising those who drink within safer guidelines. The current level of 50p has had no adverse consequences and the benefits seem roughly in line with the Sheffield predictions. However, leaving the rate as low as 50p will allow the benefit to be eroded year on year by inflation. Also, the increased affordability resulting from the freeze on excise duty places even more importance on MUP to combat alcohol harm. 50p when the calculations on which the MUP level were made is close to 60p today as a result of inflation. Resetting the level at 65p would take account of inflation and allow a modest uplift to increase the health benefits with minimal effect on modest drinkers. At 2016 prices (the latest available for modelling) an increase to 65p would cost moderate drinkers less than 25p per week. The benefits of a larger increase are difficult to gauge while data on effectiveness is still emerging, and might start to impact on modest drinkers on low incomes. SHAAP believe that an immediate increase to 65p is a sensible compromise which will not erode public support for MUP. The timing for an adjustment is appropriate: 3 years since MUP’s introduction and 3 years before the deadline for the Scottish Parliament to consider its effectiveness (the so-called ‘sunset clause’).

MUP is working, it is saving lives but to continue to do so at a meaningful level, SHAAP propose an immediate increase in the minimum price to 65p per unit.

All SHAAP Blogposts are published with the permission of the author.